START PAC is not only a women led business, but our President Eve is a cancer survivor herself, so this campaign means a lot to us here at START PAC HQ. West Ham United women’s team have bought out a limited edition shirt to help support and raise awareness for Breast Cancer.

All profits from shirt sales go to the charity, and they raised an amazing $26,000 last year so lets help them smash it for 2020!

The article below was originally featured on whufc.com

West Ham United women’s team is delighted to once again announce the release of a limited-edition pink shirt to show the Club’s support for Breast Cancer Now. 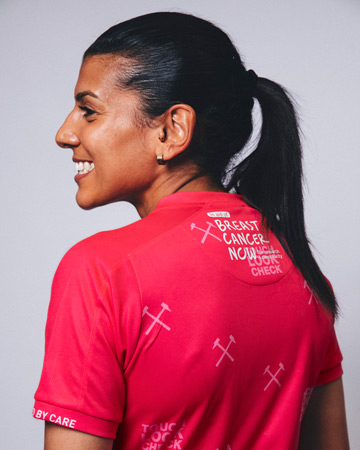 Following the success of last season’s campaign, which saw the specially-designed Umbro pink shirt sell out in record time and raise significant funds for a fantastic cause in the process, the women’s team will once again wear the shirts for every fixture throughout October, which marks Breast Cancer Awareness Month.

The pink shirts will be worn for the first time in this Sunday’s Barclays FA Women’s Super League match at home to Reading, with the entire profits from the sale of the shirts going to Breast Cancer Now.

The clean design of the pink shirt features the pink ribbon on the front, the international symbol for breast cancer awareness, while the back incorporates instructions on how to check for symptoms and the Hammers’ iconic cross-irons symbol.

West Ham United women’s managing director Jack Sullivan said: “The support for our campaign to raise awareness of breast cancer was an incredible success and I am delighted to once again partner with Breast Cancer Now to use our privileged position as a professional football club to help their cause.

“Our support last October helped to raise tens of thousands of pounds for Breast Cancer Now and generate millions of engagements on social media, providing funds and much needed awareness for their work. Our aim is to better that this season. 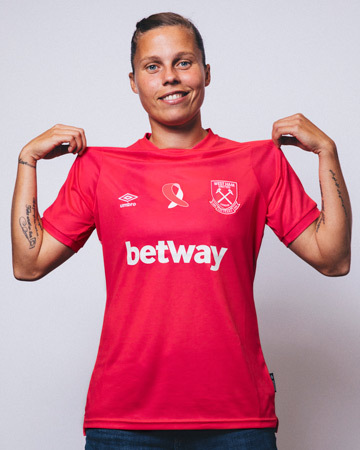 “Once again, the introduction of a limited-edition pink shirt will allow for our support to be visual during matches, and our commitment to donating all profits from sales of these shirts in our official stores shows our full backing for Breast Cancer Now.”

West Ham United women’s captain Gilly Flaherty said: “The West Ham fans were amazing in helping us to back this cause last season and I hope they, once again, will be behind us in joining the fight against breast cancer.

“Breast cancer is unfortunately an all-too common illness that affects women and men of all ages all across the world, and any help we can give in raising both awareness and funds is something the entire team and I are thrilled to be a part of.”

The limited-edition shirt is available to pre-order in our online store now in both men’s and women’s sizes!

Every year, around 62,000 people are diagnosed with breast cancer in the United Kingdom; the equivalent of one person every ten minutes.

Let’s stand together against breast cancer!

Find the perfect GPU for your Aircraft

We will help you find and customize the perfect unit for your aircraft, locomotive or vehicle.